Great Romantics and various other surprises ...

Previous Next View All 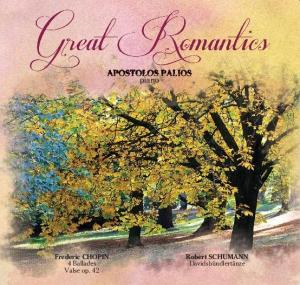 Recently, I've been downloading some free for commercial use images from Pixabay to use in my Photographic Art, and as I believe in paying forward as well as back, I have also posted a few of my own photographs for others to use.

Today, as a matter of curiosity, I searched Google images as I do periodically to see who is using my images and for what they are being used.

One of my images, originally titled "Autumn on Wombat Hill", and retitled "Autumn" for Pixabay (my camera data tells me) was originally taken with my Canon EOS 450D on 20/04/2010 at 17:22:37 in the Wombat Botanical Gardens in Daylesford, Victoria.

It was a total delight to discover my image on the cover of a classical music album, "Great Romantics" by Greek pianist, Apostolis Palios - Chopin and Schuman being two of my favourite composers! Full marks to the producers of this album for paying the courtesy of crediting me with copyright of the original image on the back cover!
http://www.smusic.gr/store/p75/Great_Romantics.html

I was very happy to see my image used on several gardening blogs and websites, as well as a naturopathic healthcare website, a poetry site, a couple of psychologists, a psychoanalyst and as the Header for a South American site advertising National Parks.

I was a little surprised to see a Japanese site advertising the beauty of the Nara Prefecture in Autumn, especially as my image was taken thousands of miles away in Australia.

Ditto, an Italian site using my image to extol the virtues of the parks and gardens of Florence, even claiming the image as "from the Casine at the Iris Garden".

Never let the truth get in the way of a good advertisement, obviously!

It almost goes without saying that there were at least two shops on Zazzle who are selling my image as posters and claiming it as their own!

But the one that absolutely floored me was Psychic, Cate Communicates, on Google Plus, who used my image (for which she has yet to thank me, by the way!) below the caption, "No duty is more urgent than that of returning thanks". And, what's more, she has claimed it as her own by adding bogus camera information.

My image, "Autumn", has been downloaded from Pixabay 382 times.

Only 10 people have taken the time to click like, and 11 have left stars (most likely the same people).

Not one person has bothered to say thank you, or leave a comment.

I know I shouldn't be surprised, human nature being what it is, perhaps aghast would be a better word!