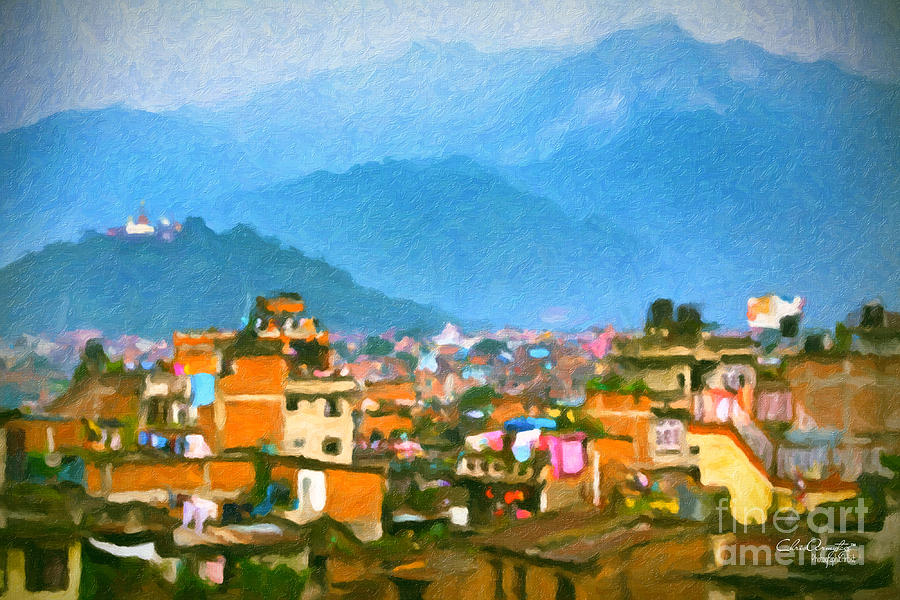 The ancient and colorful city of Kathmandu nestled amid the high mountains of the Greater Himalayas. Kathmandu has a rich history, spanning nearly 2000 years, as inferred from inscriptions found in the valley. Religious and cultural festivities form a major part of the lives of people residing in Kathmandu. Most of Kathmandu's people follow Hinduism and many others follow Buddhism. There are people of other religious beliefs as well, giving Kathmandu a cosmopolitan culture. Nepali is the most commonly spoken language in the city. English is understood by Kathmandu's educated residents. Historic areas of Kathmandu were devastated by a 7.8 magnitude earthquake on 25 April 2015. "Kathmandu, Nepal" is part of a series of colorful urban landscape paintings titled, "Cities and Towns I Love" Copyright 2015 ChrisArmytage�, Photographic Artist, Australia.

Many thanks to the buyer from South Wales!

Wonderful colors....and just the right amount of fuzz to make this painterly rather than photographic! F/L

Thanks Sarah, Kathmandu is a magical place high in those wonderful mountains. I went there some years ago and always meant to paint it. So happy that you like this :) xo

Congratulations on being featured in the Fine Art America Group "Images That Excite You!"

Thank you so much for the feature John :)